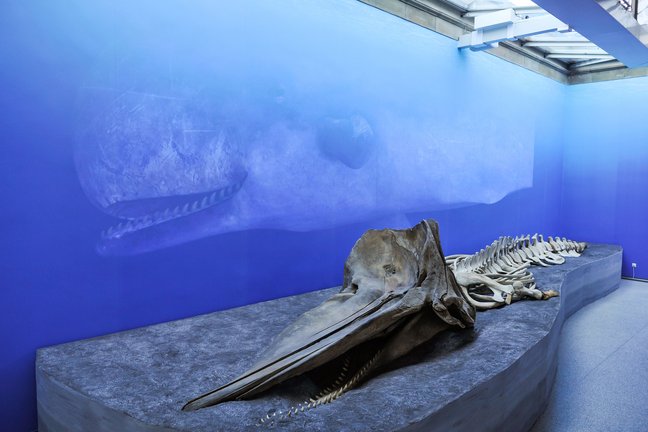 The sea itself is GIGANTIC: the oceans occupy two thirds of the earth’s surface and turn our planet – seen from space – to the blue planet. In the third dimension, the sea is no less GIGANTIC: the highest mountains of the earth could easily be completely submerged in the deepest trenches of the Pacific Ocean. GIGANTIC are also many of the organisms living in this apparently infinite space.

The big portico in the Schloss Rosenstein becomes an ocean. Get into the submarine and go on a journey diving down in this mystical world under water!

Sei whale and sperm whale, whale shark and great white shark – the central ocean hall, for the special exhibition entirely redesigned, is an area of superlatives. Record holders among these giants of the seas are, without any doubts, the whales. Walking around the 13-meter-long sei whale, one of the highlights of the exhibition, you can admire its taintless, streamlined elegance on the one hand and gain insights into its complex inner life on the other. Also on the move in the open water are two large sharks: the huge whale shark, the biggest fish on earth, which lives from plankton just as the sei whale, while the rare great white shark preys on large animals such as marine mammals.

As impressive as sei whale and whale shark is the skeleton of a sperm whale, shown for the first time in our museum. He is the biggest of the toothed whales. On the bottom of the deep-sea sources of life are formed on such sunken sea giants.

Deep-sea – the largest habitat of the earth and one of the most extreme. Strange creatures are moving around in the eternal darkness, legendary above all the myth-inspiring giant squid. Once your eyes are adapted to the twilight, you will discover bizarre species such as the oarfish, giant crabs and giant isopods!

GIGANTIC can also consist of very small: krill or fish can unite to huge swarms or schools. Tiny coral polyps form extensive reefs, the most divers and species-rich habitats under water.  Not so colorful, but not even less complex are the kelp forests build by the giant kelp. You can range these woods in the showroom “GIGANTIC complex”. But there civilization catches up – enormous garbage patches compromise the marine ecosystems in a massive way.

Far away from such modern problems, you can travel back in time in GIGANTIC in the sea. There, amongst others, you can meet a 190 million years old, large ichthyosaur in an impressive three-dimensional preservation. And last, but not least the tremendous set of teeth of Megalodon, the unchallenged terror of the prehistoric oceans.

funded by the Ministry of Science, Research and Art Baden-Württemberg