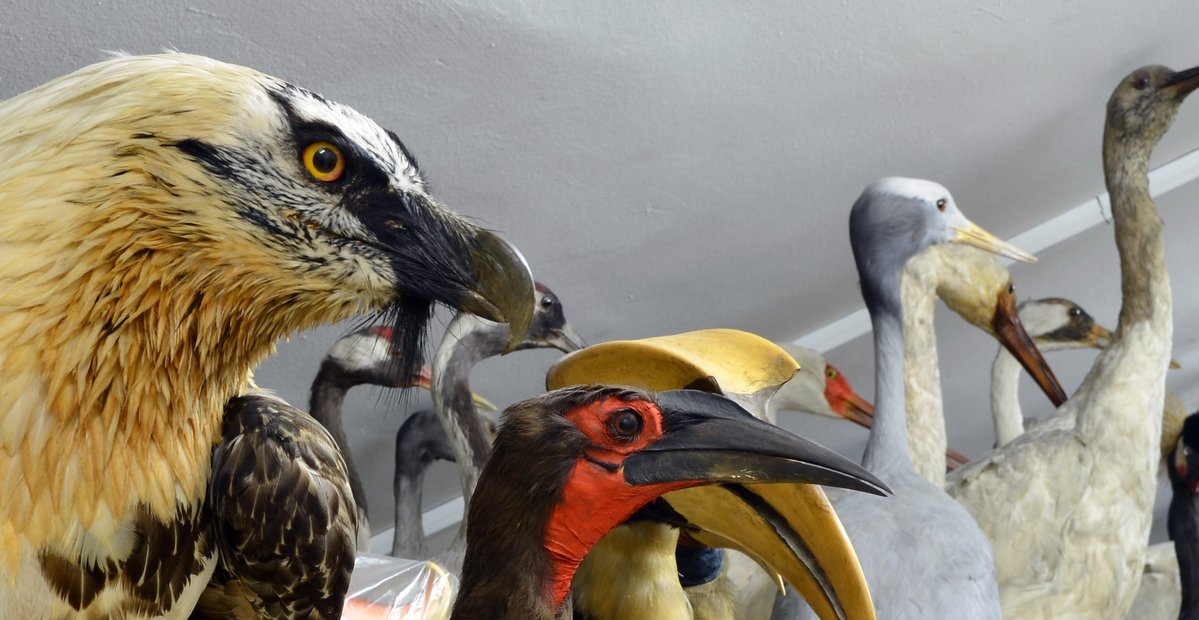 The zoological collections of the SMNS hold species and specimens (in total c. 1,350,000 objects) from around the world, their historical significance reach far beyond a southwest German focus. Owing to the manifold taxonomic interests of individual early naturalists leaving their collections to the Natural History Museum Stuttgart, significant parts of the historical zoological collections share a similar provenance. The present growth of the collections (physical specimens as well as DNA samples) is tightly linked to our research in tropical biodiversity hotspots and on native fauna – the latter including, e.g., time series of bird morphology, highly endangered species (e.g. thick shelled river mussel, groundwater snails), invasive (e.g. bullfrog) or socially controversial species (e.g. beaver, greylag goose). 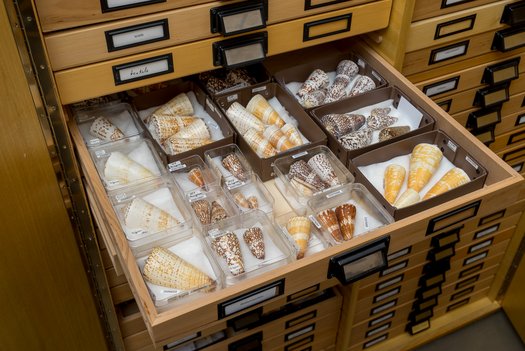 The mollusc collection at the SMNS comprises more than one million specimens in more than 130,000 lots. Exotic marine shells represent the oldest objects already listed in the catalogue of the physician Pasquay (Frankfurt a. M.) in 1777. The collection Clessin (German, Austrian and Hungarian molluscs, bought in 1903), the collection Zwiesele (bivalves from rivers, lakes and ponds of southern Germany and Switzerland, bought in 1925), and the collection Geyer (molluscs of the state Württemberg; bought in 1932) are especially worth mentioning among the historical parts. During World War II some parts of the collection were destroyed but the main portion survived undamaged and is available to scientists from all over the world.

In addition to the scientific revision of these old collections, new material is assembled during focused collection for current research projects. For example, land and freshwater molluscs are well suited to evaluate habitats because of their low mobility and often very special ecological requirements. Records of live snails and empty shells allow investigations of population dynamics and site fidelity. 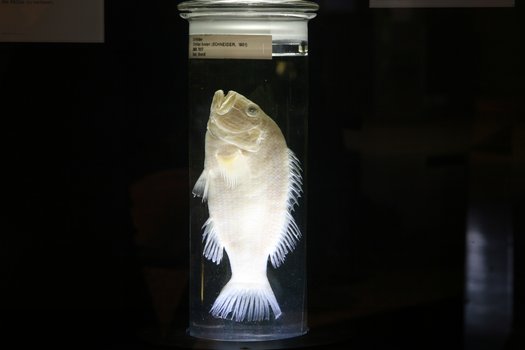 The SMNS fish collection contains about 5,000 historical glass vessels. The first fish specimens were collected in 1805. The most important historical collection parts can be credited to the following collectors:

P. Bleeker (1819-1878). Bleeker donated numerous fish from Dutch India (now Indonesia) to the museum. The museum received two shipments of material from Bleeker in 1860 and 1861. The collection contains many type specimens of species described by Bleeker.

C. B. Klunzinger (1834-1914). Klunzinger spent twelve years of his life in Kosseir (Al-Qusayr, Egypt, Red Sea), where he researched the marine fauna and collected fish for the Natural History Museum in Stuttgart. Our collection contains many types of Red Sea fish described by Klunzinger. He also worked at our museum for five years as a collection assistant.

F. von Mueller (1825-1896): Mueller (from 1867 von Mueller) was the director of the Botanical Garden in Melbourne, Victoria, Australia. He undertook numerous research expeditions in Australia and New Zealand and donated many fish from Victoria, South Australia, Western Australia, Northern Territory, Queensland, New South Wales and New Zealand to our museum. The Mueller fish material was identified and scientifically described by C. B. Klunzinger. Numerous type specimens are included. 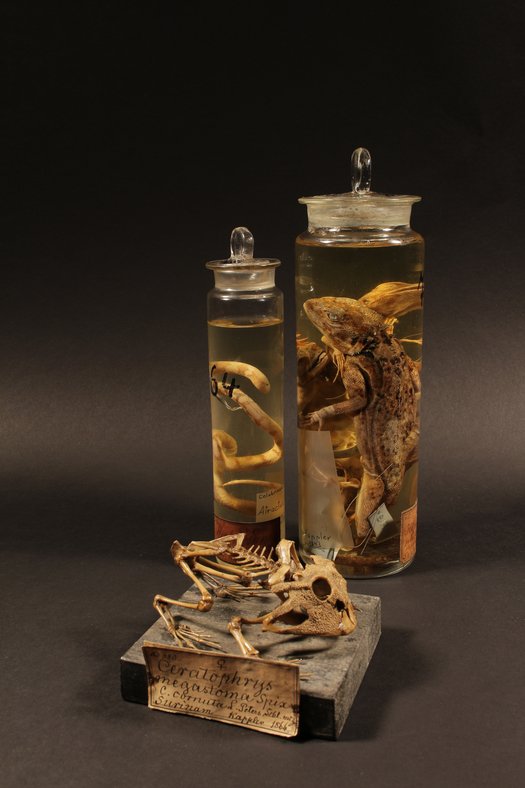 The herpetological collection housed at SMNS comprises about 27,000 specimens of amphibians and reptiles from all over the world making it the seventh largest collection of its type among the German natural history museums. Most of the material is historically valuable. Among the first specimens arrived in the late 1820ties were snakes and frogs from the Cape Province of South Africa donated by Carl Ferdinand Ludwig (1784-1847). Larger specimen series were later presented by Ferdinand Müller from entire Australia (collected between 1869 to 1896), August Kappler from Surinam (collected between 1840 to 1872) and Francis Sarg from Guatemala (collected between 1878-1881). After relocating the wet collections from their WWII hideouts around Stuttgart to Ludwigsburg Heinz Wermuth (the first curator of herpetology at the SMNS) had not obtained any inventory of amphibians and reptiles. Consequently Wermuth had to re-organise, re-identify and re-catalogue the entire collection.

Nearly all amphibians and reptiles and its type specimen were data-based from 1994 onwards. A detailed summary on amphibian and reptile types housed at the SMNS is presented in Schlüter & Hallermann (1997). 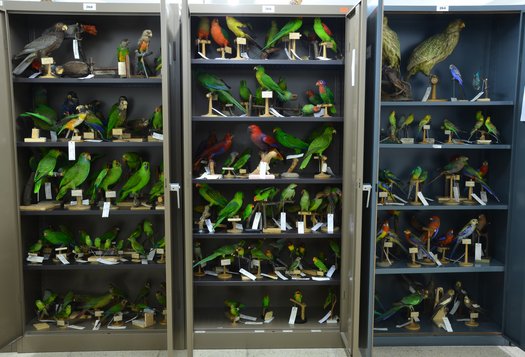 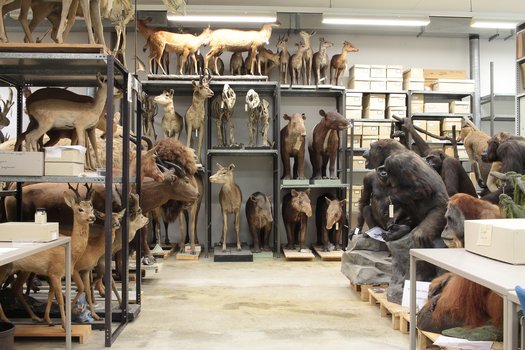 The beginnings of the SMNS mammal collection date back to the early 19th century. A catalogue of the collection was compiled in 1837 and continually updated ever since. Particularly valuable are well-preserved collections of Baron C. von Ludwig (Africa), A. Kappler (South America), F. von Mueller (Australia) and T. von Heuglin (Africa). Meanwhile, the number of specimens collected worldwide has grown to over 54,000 (including 236 type specimens). More than 1500 species from all mammalian orders are represented, i.e. about a quarter of all extant species.

The main focus of the collection is on the most species-rich orders of rodents, bats and insectivores predominantly collected in Africa and Europe. Ecological and taxonomic research by F. Dieterlen, curator of the mammal collection of the SMNS 1969-1994, in species- and endemic-rich tropical Africa, specifically increased the collection of African small mammals. Fundamental work on the fauna of the state of Baden-Württemberg resulted in a quantitative increase in the population of native small mammals. Of particular importance are also a relatively large population of (non-human) primates, a systematically broad special collection of aquatic mammals (by G. Pilleri) and a large bat collection (mostly collected by B. & W. Issel). Current additions to the collection mainly include tissue and DNA samples (e.g. from beavers), mostly based on SMNS research.

The anthropological sub-collection comprises about 1,000 skulls and other human skeletal remains.

In addition to scientific research, the collections also allow us to provide assistance for customs or criminal investigation. For this purpose, we have assembled what we call our "Bone ABC" for birds and mammals – comparative collections of specific bones of common or frequently found species.