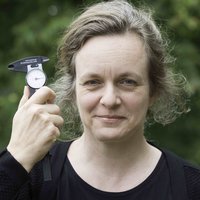 Many bird species are confronted with rapidly changing environmental conditions, be it on our doorstep or in the tropics, such as in Madagascar. Only in long-term studies does it become clear which life histories individuals are pursuing, e.g. in terms of their ecological niche or their survival rates. It is important to me to apply my research results in a practical way, for example when monitoring diseases in Germany or for nature conservation in Madagascar. 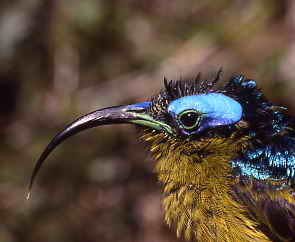 In this long-term study we investigate many different aspects of the unknown biology of rainforest birds in Madagascar ranging from basic morphology, timing of breeding and moult, bird taxonomy and systematics, species communities in relation to land use and habitat, nutrition using direct observations and stable isotope analyses to avian malaria including the study of some vectors. 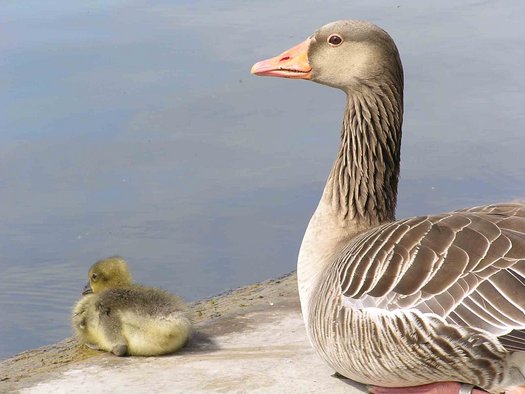 Feral Greylag Geese - why do they fare so well? 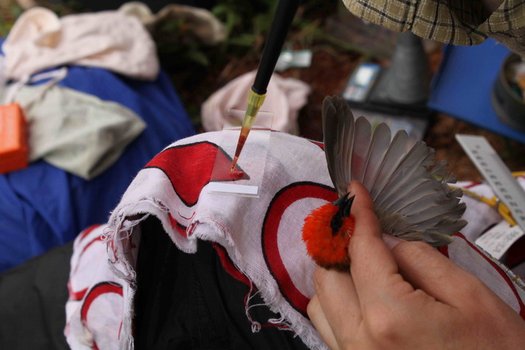 Madagascar is the fourth largest island in the world and because of its long isolation from the mainland known for a high number of endemic species. Since 2003 scientists from the Natural History Museum in Stuttgart cooperate with ornithologists from the University of Antananarivo to investigate various aspects of the birds that occur in the rainforest of Maromizaha. Recently, the avian blood parasites and their vectors, various mosquito species, have come into focus. Cooperating scientist from the University of Stuttgart-Hohenheim managed to extract parasite DNA of from a drop of blood that had been taken in the field from the birds’ wing vein. In birds sampled in 2012, over 50 % had blood parasites comprising the genera Plasmodium, Haemoproteus and Leucocytozoon. This is a very high prevalence for birds and we are now able to relate individual traits of the birds and ecological parameters to parasite prevalence. In 2014 we started to investigate the vectors of Plasmodium in the rainforest. Mosquito scientists from the Institute Pasteur Madagascar joined our team in the forest. They put up light traps during the night and identified the mosquitoes they caught the next morning. Even a new mosquito species was found. The dried (and identified) mosquitoes were brought to Germany were Sandrine Schmid from the Institute of Parasitology of the University Stuttgart-Hohenheim managed to extract the same Plasmodium lineages from the mosquitoes that we had previously found in the birds. The new mosquito species even turned out to be the most important vector in that area. If you want to find out more about this project, please see https://smnstuttgart.com/2015/09/02/von-voegeln-blut-muecken/ or our paper "Avian malaria on Madagascar: bird hosts and putative vector mosquitoes of different Plasmodium lineages" in Parasites & Vectors: http://rdcu.be/olpg 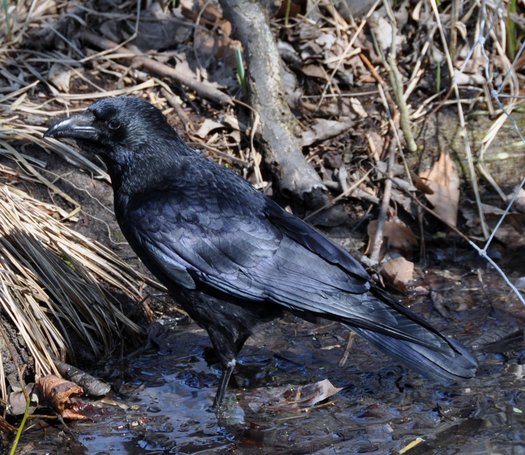 Tantalized by our findings on Malagasy avian blood parasites, we now want to find out more about haemosporidian parasites in bird species right on our doorstep. We started to check some locally shot Carrion Crows that were given to us by hunters. The molecular biologists at the Institute of Parasitology at the University of Stuttgart-Hohenheim detected haemosporidian parasites of the genera Plasmodium, Haemoproteus and Leucocytozoon in 87 % of the crows. The birds appeared completely healthy before being shot. Some of the parasite lineages found are very similar to those from corvids sampled in Japan and North-America. If you want to find out more please see "Carrion crows (Corvus corone) of southwest Germany: important hosts for haemosporidian parasites" in Malaria Journal http://rdcu.be/vNOu 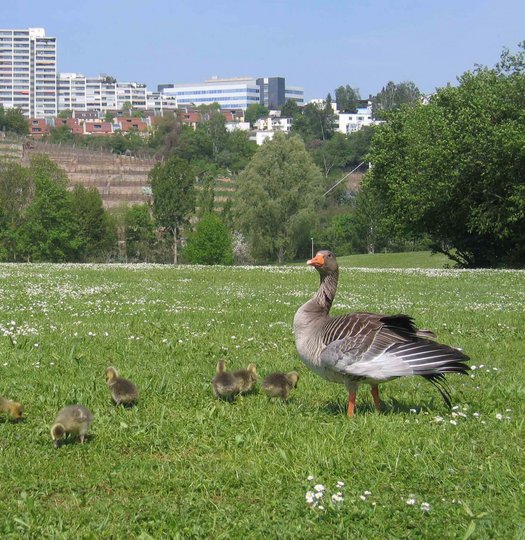 As part of the research programme “Wild Birds and Avian Influenza” the State Ministry for Agriculture Baden-Württemberg financed fourteen research projects, amongst them one conducted by the museum entitled: ”Between the city and the wild: Movement patterns of feral Greylag Geese in the Neckar valley and their potential relevance for spreading bird flu”. Weekly counts of the Greylags along the Neckar between Tübingen - Stuttgart – Heilbronn and recording of coloured leg bands of ringed birds provide information about the movements of individuals. Furthermore, all other waterfowl species sighted are documented during the goose counts, as reference. This provides information about the movement patterns of the geese and thus about the potential pathways the bird flu viruses may be spread. To find out if geese are infected with avian influenza viruses, the “Chemical and Veterinary Medical Institute in Stuttgart” (CVUA) analyses monthly faeces swabs of individually marked geese. Thus, in case of an acute bird flu epidemic, the Greylag Geese act as an early warning system. 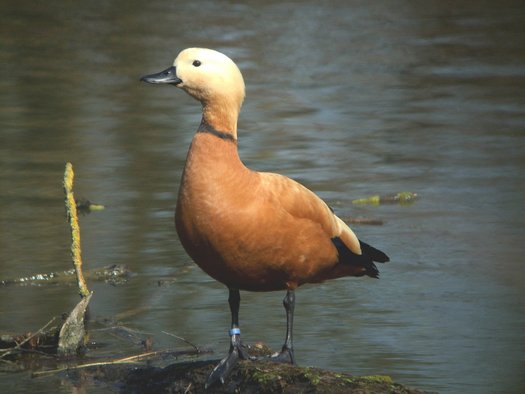 There are introduced species on our doorstep, but also in distant countries, such as Madagascar [35], where they can sometimes cause major problems for native animals and plants. Non-native animals are not automatically invasive - in other words, not all of them harm native animals or plants. This topic also deals with the nationwide nature conservation policy, which we as a member of the working group Neozoa of the German Ornithological Society provide advice, e.g. with status classification [12], [20],[28], [29], [30]. 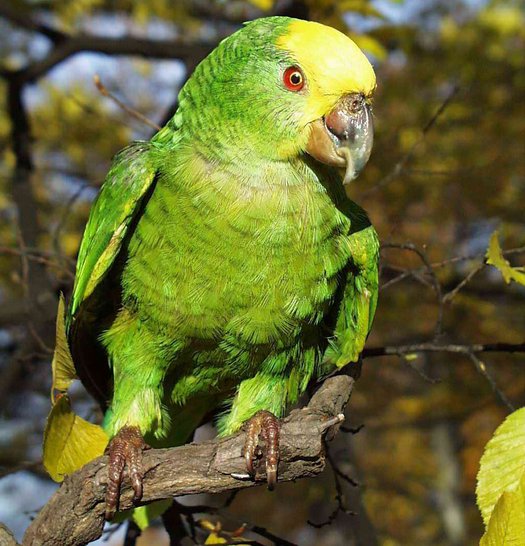 The number of non-native animals increases especially in our cities. Often we know little about their ecology and behavior: do they pose a threat to native animals and plants? Yellow-headed Amazon parrots (Amazona oratrix) have been breeding regularly in Stuttgart since 1986, with a small but stable population. How do they manage to survive in the new habitat, how have they adapted? As part of her bachelor thesis, Johanne Martens examined various aspects of their ecology. She watched the birds roosting, brooding and feeding behaviour. The diet of the Amazon parrots comprised 64 plant species from 23 families, 37 native and 27 non-native species [25]. Often green or even poisonous parts of plants were eaten, which are of no importance to other animal species. A population survey showed a high level of acceptance for this introduced species.[30]. When asking the local people how they like the parrots, most of them showed a high acceptance for this new species.

Teaching at the University of Hohenheim, Germany (annual events)