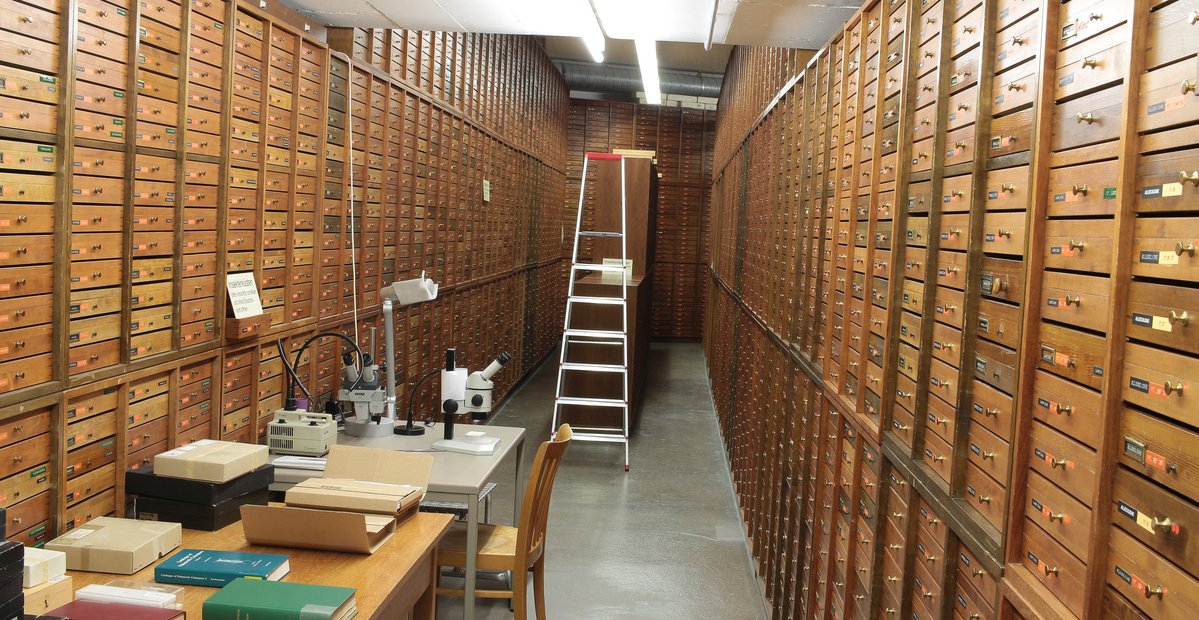 The entomological collections include more than 5.5 million specimens from all over the world, thus forming the largest part of the museum’s inventory. Its major part holds about 4.8 million dried insects stored in more than 22,000 insect drawers. Additionally, a considerable amount of insects and other arthropods, mainly Crustacea and Arachnida, are stored in ethanol. In recent years, specimens are increasingly preserved in 100 % ethanol and stored in deep freezers at -80° C for genetic studies.

Ernst Hoffmann (1837-1892) became in 1869 the first entomologist employed on a full-time basis. He was lepidopterist and published the "Die Großschmetterlinge Europas". In 1913 Erwin Lindner (1888-1988) joined the the museum and was head of the Department of Entomology until 1953. He edited the "Fliegen der paläarktischen Region" which is well known among entomologists. Subsequently, from 1956 until 1982, the coleopterist Karl Wilhelm Harde (1922-1982) was head of the Department and co-editor of the "Käfer Mitteleuropas". In 1963 the section for phylogenetic research was founded for Willi Hennig (1913-1976). In 1998 this section was partly merged with the Department of Paleontology and partly with the Department of Entomology. 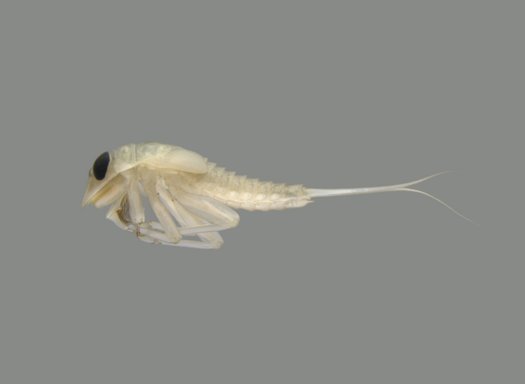 Emphasis is laid on a phylogenetic reference collection of Ephemeroptera on a global scale, including type series of 25 species. Its main geographic focus lies on Central Europe, the Caucasus, South Africa, and New Zealand. Additionally, a faunistic reference collection of German Ephemeroptera, Odonata, Plecoptera, and Trichoptera has been established. 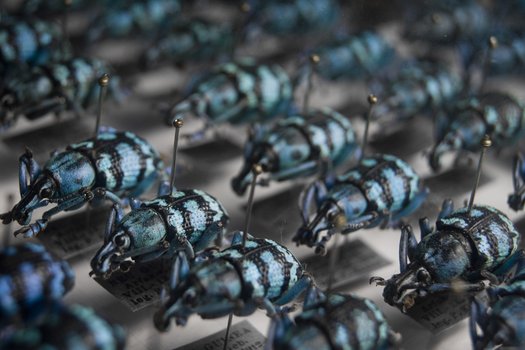 The beetle comprise the largest insect collection at SMNS with about two million specimens and almost 60,000 species. Its major part was acquired during the last 70 years. Geographical emphasis lies on the Old World, notably Europe, southern Africa, Central Asia, the Himalayan region, and tropical Asia including New Guinea. Its systematic focus encompasses Carabidae, Silphidae, Leiodidae, Prostomidae, Tenebrionidae, Chrysomelidae, and Scarabaeidae. The collection holds about 5000 type series. Local collections of numerous contributors (Böhme, Buck, Gladitsch, Köstlin, Ulbrich, von der Trappen) together form a faunistic reference collection on South German beetles. The beetle collection also includes numerous special collections with a large amount of type material: the collection Puthz on the staphylinid genus Stenus contains 80 holotypes and numerous paratypes. The collections Daffner and Angelini on Leiodidae and the collection Heinz on Carabidae also hold a large amount of type series. Due to the work of Wolfgang Schawaller, a beetle curator at the SMNS from 1983 to 2015 and from 1995 to 2015 also the head of the Entomology Department, the outstanding collection of Tenebrionidae includes 631 type series of 210 species of the genera Laena and Platydema. It also encompasses type material of other specialists on Tenebrionidae, namely, Ando, Bremer, Grimm, and Masumoto. 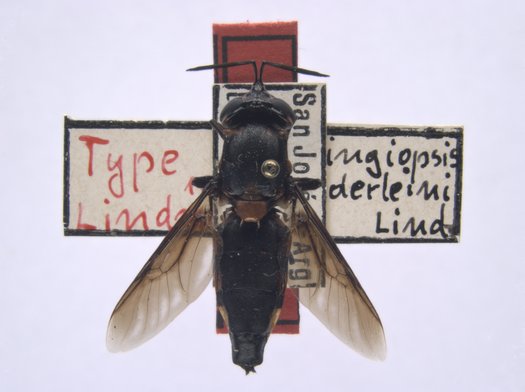 About 450,000 specimens of about 12,000 valid species form the Diptera collection including about 1150 type series. Two-thirds of the specimens are stored in dry condition, one-third in ethanol. The oldest specimens were collected by Karl von Roser (1822–1861) in the first half of the nineteenth century. When Erwin Lindner became a curator of the SMNS early in the twentieth century, his emphasis was the enlargement of the collection serving as a scientific source for the edition of his monumental series “Die Fliegen der Paläarktischen Region”. Lindner collected many species himself but also motivated colleagues to donate or sell their material, e.g., Plaumann, Aharoni, Engel, Richter, and many others. Most of the flies and midges in the collection are from Europe, but Lindner’s expeditions in the 1930’s and 1950’s also yielded much material from South America and Africa. The collection’s main focus lies on Stratiomyidae, Cecidomyiidae, Muscidae, Anthomyiidae, and Tachinidae, thus reflecting the main working areas of curators Erwin Lindner, Edwin Möhn, Willi Hennig, Benno Herting, and Hans-Peter Tschorsnig. Especially the parasitoid family Tachinidae, which is also of importance in applied entomology, is studied in the SMNS since more than 50 years. 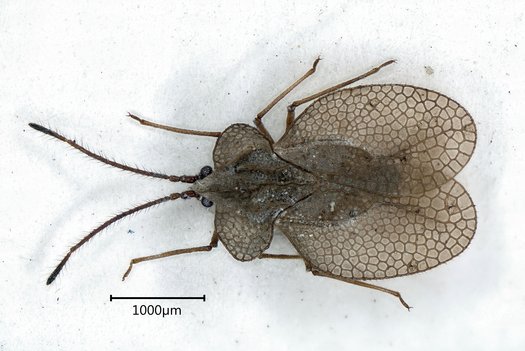 Of considerable importance is the Hemiptera collection comprising 160,000 specimens of cicadas (Auchenorrhyncha) and 80,000 species of true bugs (Heteroptera). Among these, there are 80 type series. 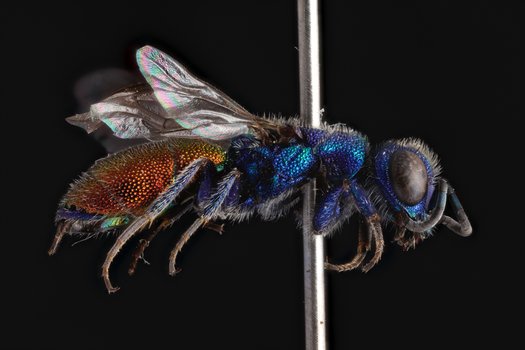 The Hymenoptera collection accounts for 350,000 pinned specimens including about 200 type series. Its oldest stock dates back to the nineteenth century and is based on the historic collection of von Roser. Also of historic importance is a reference collection of Ichneumonidae by the eminent German hymenopterist Otto Schmiedeknecht. Furthermore, the collection Gauss features numerous species relevant for forest entomology. The recent focus of collection especially lies on the Aculeata of the Neotropics and on Scoliidae, Ichneumonidae, and Chalcidoidea on a worldwide scale. Also worth mentioning is a collection of bee and wasp nests. As part of the project German Barcode of Life, about one million specimens of Hymenoptera: Parasitoida were collected throughout Germany by malaise traps. From these samples, a molecular reference collection of presently 2,500 species has been compiled. 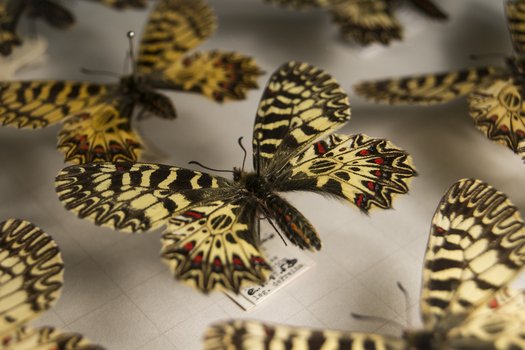 The Lepidoptera collection holds over 400 type series—among these specimens of the recently described family Pseudobistonidae (Geometroidea). A reference collection of Macrolepidoptera of SW Germany kept separated.

The Orthoptera collection numbers up to 60,000 specimens including 50 types

The entomological department also curates the worldwide largest collection of wood lice (Isopoda: Oniscidea). This is due to the ongoing work of Helmut Schmalfuss, a curator at the SMNS between 1977 and 2007. Its geographical emphasis lies on the Eastern Mediterranean. It comprises about 83,000 specimens of 1462 species and includes type species of 350 species. The type collection also includes important type material by Italian isopodologists Ferrara and Taiti (University of Florence, Italy). The entire collection is completely identified, catalogued, and available online.

The spider collection of the SMNS contained about 200 types from Strand, Bösenberg, Keyserling, and L. Koch, but has been completely destroyed in World War II during a bombing raid. As a result, and for the reason that no arachnologist was in charge since, the spider collection is rather new, with the oldest specimens collected in the 1970s. Currently there are some 3.000 series from 600 species available, all digitized (but only a few imaged) and databased. Most specimens are from Central and Southern Europe, but also from all around the world.

In 2017 the unlabelled holotype of the famous scorpion Pandinus imperator was rediscovered in the dry collection. The SMNS also houses the Weygoldt collection of whip spiders (Amblypygi) with about 240 series containing more than 2.200 specimens from some 100 taxa and many types included.

The Pseudoscorpion collection contains nearly 4.000 series with more than 11.000 specimens of 322 taxa from all over the world.